You are here: Home / ABOUT US / JOHN D. DOWNING PROFILE 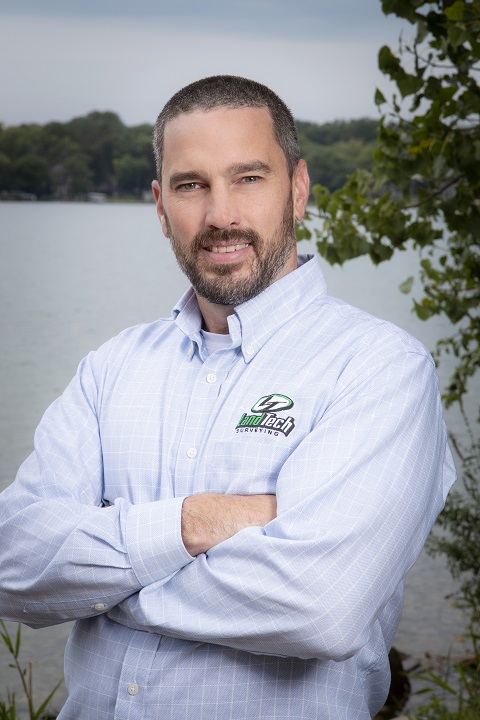 John began his surveying career in 2002 as a Field Technician with LandTech Engineering.  He learned the fundamentals of measuring land accurately alongside his crew chief.  John promptly advanced from field technician to Survey Crew Chief, working under the guidance of a professional land surveyor and mapper.  He oversaw a two-man survey crew responsible for gathering measurements in the field and generating that info into boundary surveys, plat of surveys, subdivision plats, etc.  A great deal of time was spent on construction staking for new subdivisions including laying out lots, roads, and utilities.  During this time, John found a sincere appreciation for the development process.

While John’s love for the outdoors correlated well with being a Crew Chief, he could not pass up the opportunity to advance his career when the promotion to Office Survey Manager was offered to him.  John became proficient at drafting survey maps and engineering plans using AutoCad.  As Survey Manager, John was responsible for managing all field and drafting projects including ALTA/NSPS surveys, boundary surveys, Certified Survey Maps, foundation surveys, topographic surveys, subdivision plats, condo plats, construction staking, road and utility plans for residential and commercial projects.

Although working as a Survey Manager was rewarding, John strived to work his way up the ladder.  He passed the two-day exam on the first attempt, and was granted a Professional Land Surveyors license in the State of Wisconsin on July 29th, 2009.  Becoming a Professional Land Surveyor opened the door to bigger and better opportunities, fulfilling his dream of becoming an entrepreneur.  In 2010, John bought the business that he had worked so hard for during the previous 8 years.  Since 2010, John has seen consistent growth in his business from year to year.  He found out quickly that he needed to expand the company to keep up with the demand of his clients, therefore adding full-time personnel in the field and office.

John is married to Becky who has blessed him with three wonderful sons.  They live on a hobby farm and enjoy doing just about anything outdoors including hunting, fishing, boating, camping, 4-wheeling and hiking.  John is a member of the Wisconsin Society of Land Surveyors, National Society of Professional Surveyors, Society of Southeastern Wisconsin Land Surveyors Chapter, Metropolitan Builders Association, Wisconsin Builders Association and the National Association of Home Builders.  John has been a volunteer for the Waukesha/Oconomowoc Ducks Unlimited Chapter since 2007 and served as the Chapters Chairman from 2010-2012.

Now that you know a little about John and his company, his hope is that you will give LandTech an opportunity to serve you with your land surveying needs.  LandTech has seen consistent growth due to the loyalty of their clients and a referral network that speaks for their customer service.  We will provide you with services in a timely and accurate manner while staying cost effective, while using the latest field equipment and surveying software to ensure the client has quality results.  LandTech Surveying strives for professionalism and a commitment to long-term relationships.